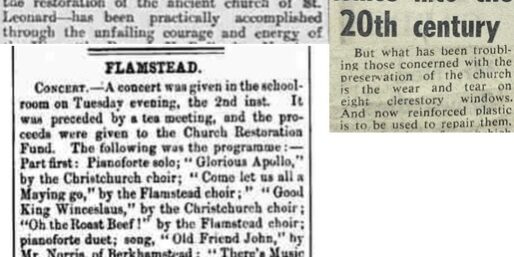 “Who pays for church repairs?….a story of under-funding in a “poor agricultural parish”

The headline in the cutting here could have been written in 2021 – but in fact it is from the Beds Advertiser and Luton Times on 31st July 1908. It continues … “through the unfailing energy of … the Vicar, (the Rev. J. V. Bullard)”.

Vincent Bullard had indeed saved St Leonard’s by rebuilding much of the collapsing tower and the north aisle and porch in 1905/6, at cost of £1,200, largely raised through “subscriptions”, raised before and after the works. But the Rev Bullard had to supervise and do much of the manual work himself as they could not afford it otherwise.

Unfortunately, soon after, a “fresh calamity befell the church” when some of the vaults collapsed and it was closed on the recommendation of the sanitary authorities as being a “peril to health”.

So, in 1908, the vaults were filled in, new pitch-pine flooring laid, the pews replaced with chairs, and the south aisle and porch repaired. This time, the Lord of the Manor, Sir Edgar Sebright stepped in and paid much of the £300 bill.

This was a throw-back to the mediaeval origins of St Leonard’s, which was probably built and paid for by the Norman de Todeni family, the 12th Century Lords of the Manor, and then by their successors and other wealthy locals.

But, over time this source dried up. For many centuries Flamstead was a “poor agricultural parish” and simply could not afford to maintain its church properly.

By the 19th Century, according to Eric Edwards in Flamstead: the listed buildings, its income came from the patron (University College Oxford), collections, fundraising and tithes. Tithes were effectively a tax of 10% of everything produced in the parish, but in Flamstead, this was never enough and, in any case, they were abolished in the 1830s.

In 1878, when the then priest the Rev. Burra left, it was said that “Flamstead was no sinecure and clergymen having the living must drain from their private resources as their income was no more than sufficient to maintain lay agencies” (such as helping the poor).

The cutting from the Herts Advertiser 13th January 1866 is a typical report on a Victorian fundraising event. It is not recorded why the Flamstead choir sung the Cornish national anthem.

Some building works were carried out, but never enough. The nave roof was repaired in 1791 and the mediaeval supporting trusses partially replaced, but, as we now know, this did not solve the problem.

The Bullard repairs took place in the early twentieth century, but then not much more until the second half of the century. There was then periodic fundraising from the community, with substantial sums raised through grants and some amazing events (see article in C&VN March 2021). £10,000 was the target to repair the nave roof in the 1960s, £13,000 in 1973 for the tower and spire, £15,000 in 1988 for the chancel roof, and £245,000 in the 1990s to re-open the West entrance and eliminate damp.

Much was achieved and large sums spent but the legacy of centuries of neglect could not be overcome. Some of the repairs such as the 1960s fibreglass window casings and the 1980s death watch beetle treatment were typical of their day. These are having to be put right now.

That brings us today. There are no longer any government funded grant schemes to repair churches, with the Listed Places of Worship Roof Repair Fund closing in 2016.

The Church of England will never “step in”, even in emergencies. Instead, responsibility for maintaining churches rests solely with the parish. When St Leonard’s was placed on the English Heritage “At Risk” register in the severest category, with the nave roof in danger of collapse, only the parish of Flamstead could save it from permanent closure. Grants are available, but the huge sums needed are almost impossible to obtain.

That is why it was so remarkable that Flamstead’s Heritage Project’s bid to the National Lottery, the only sizeable source of funds, was successful. Equally impressive was the successful bid of the PCC to the EU Leader fund for long-overdue facilities such as running water, a kitchen and a WC.

These major projects have also relied on hundreds of thousands of pounds of local funding, raised through donations, events such as the wonderful Winter Flower Festival, and pledges from over 50 villagers. We are very grateful to all those who have contributed to these projects. They literally have saved the church and preserved 900 years of history and tradition for future generations.

Much of the local funding for both projects has come through the Friends of St Leonard’s (FoSL).

We would like to thank all our members, donors and everyone who contributes to our events such as the annual Scarecrow Festival. We are particularly grateful to one local couple who made a sizeable donation to the cause.

We have also benefitted from a substantial legacy. The late Charles and Dorothy Strachan, who lived in the village for many years, remembered FoSL in their wills. Contrary to rumour at the time, they did not leave us a house, but nonetheless enough for both a major contribution to matched funding for the roof repair and for a 25 year fund towards essential routine maintenance.

There is still much to do. We have to fund the restoration of the nationally-important wall paintings and many other repairs are needed, e.g. to the stonework. Proactive, planned, regular maintenance is vital to ensure that once the building is finally put into good order, it stays that way.

Then we need to equip the church for the 21st century.

The Friends of St Leonard’s have the job of raising such funds. The charity was founded in 1995 by Harry Birtley and others as a separate entity from the Parochial Church Council, which continues to be responsible for the spiritual and operational life of the church.

That way FoSL can appeal to the many of us who are not regular church goers but do attend weddings, funerals or Christmas Services, or who value heritage and tradition and the role the church plays in the community.

Today, the upkeep of the church is the responsibility of the whole community. And Flamstead is no longer a poor agricultural parish.

If you would be interested in becoming a Friend of St Leonard’s, or helping us to secure the building for future generations then we would love to hear from you.